I cooked my first full Turkey in 41 years lol. DD was very excited, all her life we've had Large Chickens (we didn't have a working oven and they had to go in a small Nesco Roaster), Turkey Breasts or we've eaten somewhere else. I should mention I earned my Cooking Badge by cooking Thanksgiving Dinner 41 years ago. I was such an overachiever back then lol. Macaroni and cheese would have earned the badge just as well.

Then we went to the movies and saw Tangled which totally rocked :D. We've been every year since DD was about 18 months except for the year she had to be admitted to the hospital for an appendicitis attack only she didn't have an appendix anymore (a lot of gray hairs on that one).

The bad news is the house has been having some issues (boiler stopped generating heat and the kitchen sink simultaneously back up and caused flooding under the refrigerator lol). Fortunately my wonderful BIL helped me figure out how the flooding was occurring (it's a tale for another day lol) and both were relatively inexpensive fixes (but I really could have stocked up on carts with the black Friday sales). Looking on the positive, I came up with a new idea lol (more on that later too!).

I got my replacement Gypsy Wednesday! I'm still linking carts. I'm still trying to find all the carts I squirreled away because I had my first Gypsy lol. I was thinking about getting some of the newer carts (I haven't bought any full-sized carts since Joann's Founder's Day Sale except for the Creative Memories carts which I only "just" ordered).  My Memento (favorite) black dye ink pad is fading from over use and I can't find re-inker anywhere locally so I've been shopping for it online only all these other things keep jumping in the cart and it winds up be wayyyyy too much. But I found it on sale at Joann's and only cost me the Martha Stewart Seasonals Cake cart ($27.plus on sale and the pink ATG (with fifty percent off coupon which wound up being about $15).

I bought DD's big present online on Thanksgiving Day. We didn't go shopping at the stores until 10:30. DD needed new shoes and it belatedly occurred to me Black Friday might be a good day to find them lol. DD found the perfect shoes for $18.25. I missed out on Jolly Holidays online and at the store, but I wound up with Twinkle Toes (I needed a piano, stage curtain and just plain love the dancing fish) and a new coffee maker for $8.88. We also picked up a pair of gloves for the bell-ringer at the front of the store who had left hers at home.
Posted by Ohhh Snap at 6:37 AM 2 comments: Links to this post

Enfys is giving away an awesome prize on her blog. A complete set of ProMarkers. Scuttle over soon because the contest ends 11/14. http://going-buggy.blogspot.com/2010/10/win-entire-range-of-148-promarkers.html
Posted by Ohhh Snap at 11:56 PM 1 comment: Links to this post 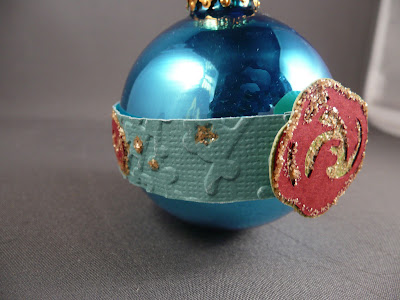 This ornament was made with some cuts from the Elegant Cakes cartridge. One large flower and three smaller spaced around the paper band embossed with the Cuttlebug Plum Blossom Embossing folder. The embossed paper strip is attached to the ball with very tacky double sided tape. The flowers are glued and embellished with antique linen distress stickles. 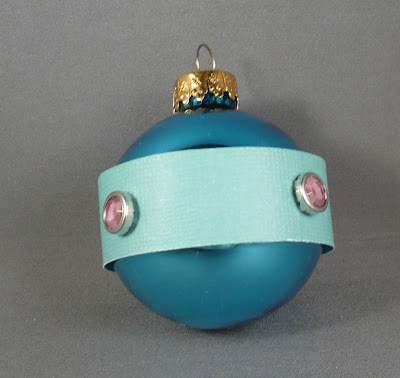 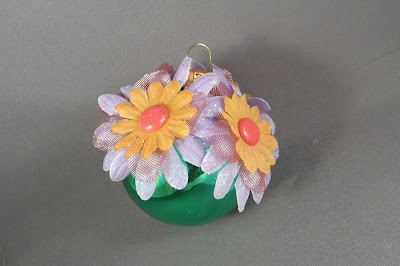 The flowers were assembled (these were from 3 Birds) and held together with the brad. Then attached to the ornament with some substantial glue dots, 1/2  inch wide with about 1/8 inch depth. I'm thinking it would also be fun to cover the ornament completely.

Papertrey Ink White twine in 3 Birds Buttons. The buttons were attached to the ornament with a hot glue gun.. 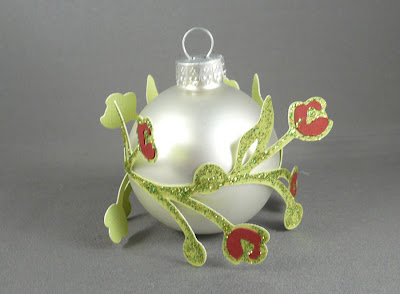 A border cut from the Elegant Cakes cartridge. The circumference of the ball was about 6 1/2 inches. This was cut fit to length at 7.5 because there was some overlap needed. I applied Stickles to the front of the cut.

Posted by Ohhh Snap at 1:03 AM 3 comments: Links to this post 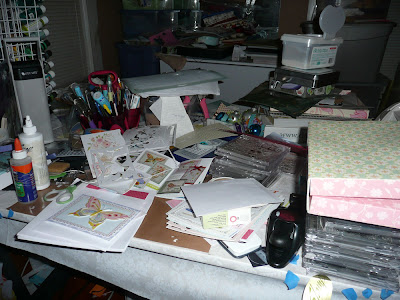 I'm putting together a set of cards from a kit purchased from HSN at least a year ago. It's sort of fun, but I'm missing the heck out of my still broken Gypsy. Provocraft sent a shipping label and it's on it's way to be replaced by a new one with the same serial number (so I can re-link all the cartridges). I've also been working on Christmas balls decorated with papercrafting materials (coming soon to a post near you) which you can see a bit of at the top of the picture. They are along the lines of the Harvest ornament in the post below this one, except for the one with buttons lol.

But when I get a little down about my gypsy being out of commission I just look at ... 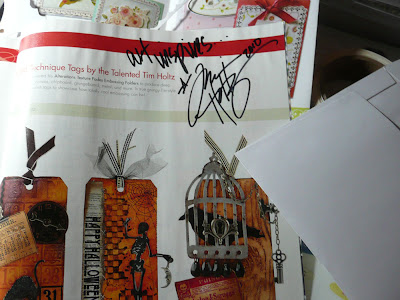 my Tim Holtz autographed copy of Papercrafts I won :D. I don't really keep it on my workdesk, but I thought you all would appreciate it and not say "Tim Who?" and I would have to reply "He's like a Crafting Super Hero", like I do in my regular life (except for my oldest younger sister who was very very excited).

If you are curious about WOYWW (what's on your workdesk? wednesday) hop over to Julia Dunnit's Stamp Ground blog and have a gander at an assortment of workdesks or even join in the fun :D. 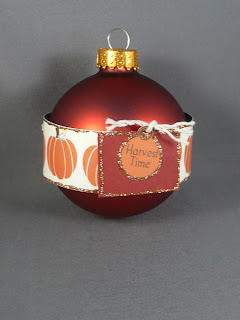 This took about 20 minutes to assemble (including applying the Stickles) and a couple of hours for the Stickles to dry. Measure the circumference of the ornament and add about 1/4 inch. Cut the paper strip and apply a really tacky doublestick tape to the back. I cut a mat about the same size as the paperstrip and applied a harvest time tag. I tied the cotton string on the tag before I attached it to the mat and unfrayed the twist after the stickles had dried. I used icicle stickles on the pumpkin leaves and copper stickles everywhere else. I used a roll of foam tape to hold the ornament while the stickles were drying. All the paper and the hang tag come from the November Club Ruby Designer's kit.
Posted by Ohhh Snap at 12:44 PM 3 comments: Links to this post

I just broke down and bought two carts (I've been very restrained about buying more carts since August). There's a two for $55.00 sale on Walmart.com, the email gave me the impression it was a while supplies last sale, but the link was provided by someone on the Cricut message board so I'm not exactly sure if they are related. The link is http://www.walmart.com/ip/Cricut-Lites-Cartridges-Two-for/15230526. I'm sort of hoping this ends soon, because I only have six of these (plus the two I just ordered) and it's so much easier not to buy anything if the temptation isn't there lol.
Posted by Ohhh Snap at 8:01 AM 3 comments: Links to this post