My Ship Has Come In: 3D Spinner in a Jar Tutorial. 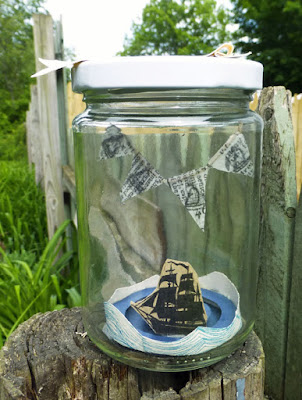 This is the tutorial for my entry for the Bedtime Stories Challenge at Waltzingmouse's PJ Party.

BTW I adapted 3D spinners from a free class I took at Craftsy called Create Stunning Birthday Cards she has three other interactive card techniques in the class. 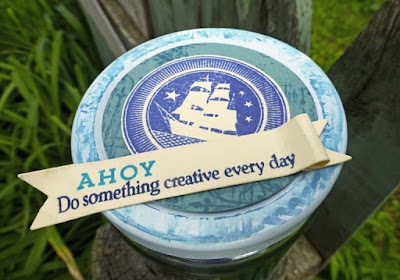 The lid  is stamped with Wendy Vecchi Archival Ink a couple of times and smudged, then heat set. Then a circle punch is put down with ATG.  The ship is also from Ocean Bound stamped with Parisian Dusk by Memento on Manilla and punched out with a 1 3/4" punch.

The doubled ended banner die is from Papertrey Ink. The right side is curled over a pencil then Scor Tape is put on the very end and then again about 1/2 inch away, bent into shape and attached to the side and fussed into shape. The AHOY is from Ocean Bound stamped with Mermaid Lagoon Distress Ink, and the sentiment is from Papertrey Ink's Studio Style stamped with Chipped Sapphire. 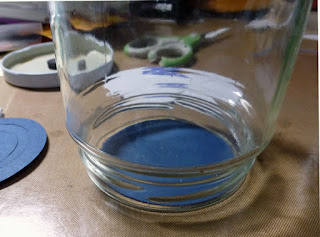 The first step is to make sure the spinner will fit through the lid. In this case, the 2 1/4 inch circle punch fits through with just a bit to spare. 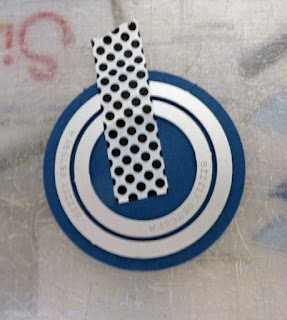 Position to circle dies within a second 2 1/4 circle punch. I keep them in place with a piece of low tack painter's tape or a piece of washi tape. The middle piece is either recycled or put aside for another project.

Now it's time to work on the spinner. 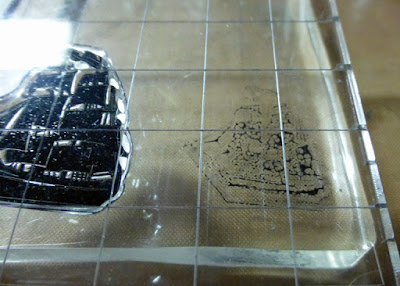 I use my little Gelli Plate to stamp an image in reverse so both sides of the spinner have an image. I haven't done a lot of research on the Gelli Plate, but the VersaFine rolls back very quickly. The image on the right was left too long. When I went to do it again, I had my paper right at hand. (Be aware of ghost images unless you wipe down the plate). 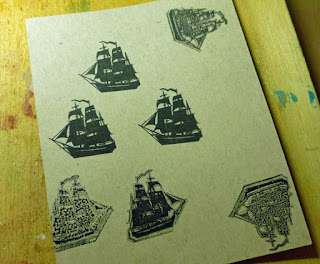 The three ships in the middle are all stamped directly. All the others are  stamped on the Gelli Plate first and then the paper is put on it and rubbed with fingers or a brayer. The variation comes with the speed the paper is put on the plate after inking. 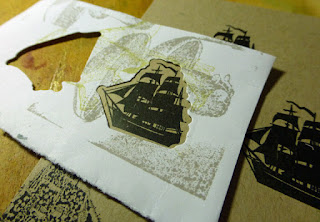 When I'm making a two sided spinner I start with a die cut. I read in a couple of forum that it is easier to get centered images by stamping first and using a mask to place the die. Tape the die in place and run it through the machine. 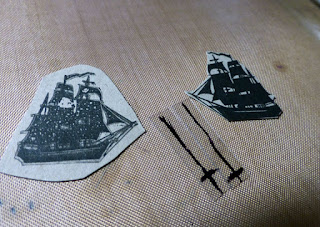 Then I fussy cut it down to the directly stamped image with a pair of scissors. The clear plastic will be the support. I drew on it with a Sharpie to make it easier to see. The reverse image is trimmed so the base line and the bow of the ship were the edges.

For this project I wanted the ship to slide around the channel rather than spinning while it's sliding, so it's important that the support is at least as wide as the channel. BTW if you want the object to really spin while it's traveling through the channel, make the support narrower than the channel. 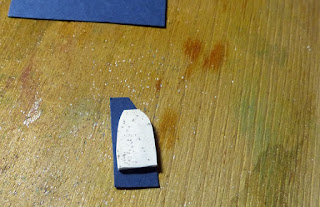 Usually I use a button or a coin as the base of the slider, but the jar is fairly narrow, so I made a rectangular base with a bit of shrink it. And because it was white I covered the top with cardstock that matched the base. 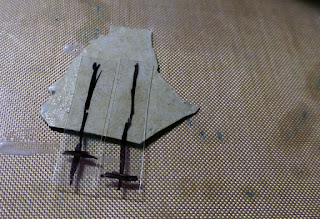 Put the directly stamped image face down apply adhesive to the back (I like Ranger's Glue N Seal because it has a little slip to it) put the support pieces down then add a little more glue and apply the reverse image and align. Set aside to dry. 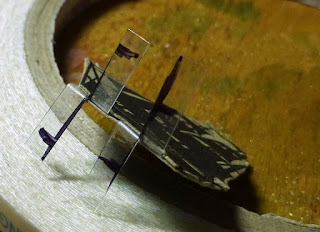 When it is dry, fussy cut the reverse image to match the front. Then cut each plastic in  half vertically (so there are 4 pieces instead of 2) and fold them to a 90 angle from the base of the image altering between the left and right side. 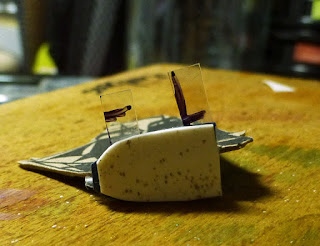 Put Scor Tape on the top and attach the plastic supports.  Trim the plastic flush with the sides of the slider base. Now that the slider is made the height can be determined. It needs to be high enough for it to slide easily. 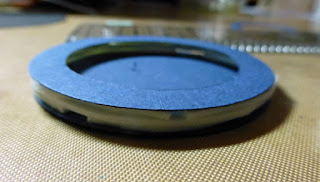 I used three layers of foam tape cut very very narrowly at the outer edge of the die cut to set the height. 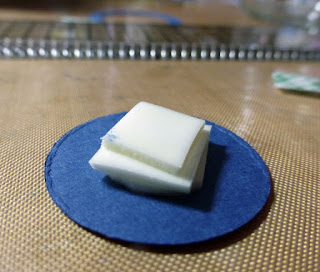 Three layers of foam tape in the middle so they are the same height (very important to keep the spinner from falling out of the channel). Again, leaving room for the sliding part of the ship to move around. 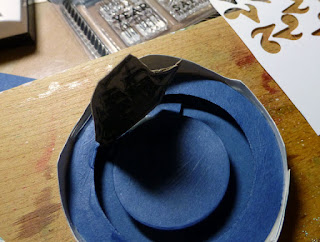 The sides were made by stamping the Hero Arts Waves background stamp and cutting out a line of waves. Scor Tape was put around the side (where the foam tape is) and the waves attached to the side. Insert the slider in the channel. 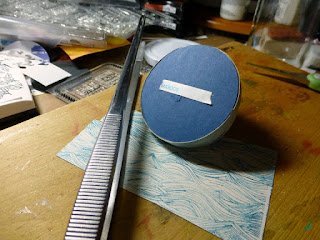 Apply a little Scor Tape to the bottom and use a large pair of tweezers (these are sold for Terrariums) to lower the spinner into place. Press down on the middle to make sure it's going to hold in place. 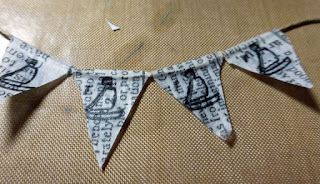 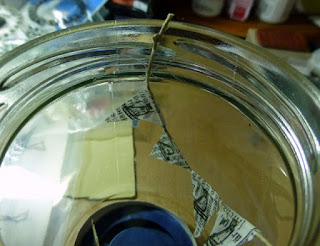 Tie a knot at each end of the banner and tape inside the jar under the knot. Put on the lid and ta da! 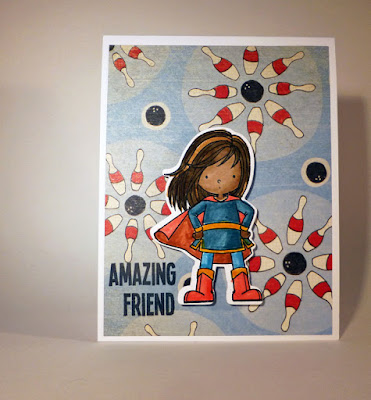 The image and sentiment are from My Favorite Things You're Super stamp set The image is cut with the matching Die-Namics Dies set. The patterned paper is from K&Co.

The coloring is all done with Distress Markers. I made a mistake on the skin color combination and started with Old Paper (which has a green cast to it)  instead of  Antique Linen. I solved the green problem by coloring over the Old Paper with Tattered Rose and then using Tea Dye. The hair is colored with Gathered Twigs with streaks of Tea Dye. Since there was a lot of coloring, I'm entering it into the 30 Day Coloring Challenge.