A Look Ma, A No Cricut Birthday card 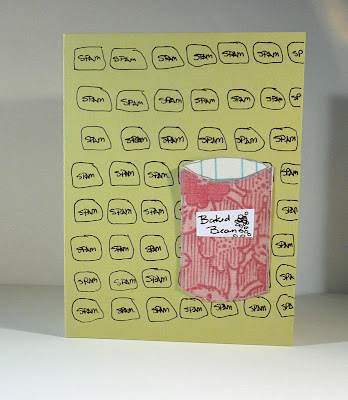 That's right, not one single thing do to with the Cricut lol. All hand drawn and hand cut. It's a reference to the Monty Python Spam song in a birthday card. Inside it says "I hope your birthday is a blast".  The can of baked beans is lined on the edges with a silver gel pen. The top of the can was easy peasy. After I cut the base, I glued the top of the can paper on and then cut it to fit.
Posted by Ohhh Snap at 9:49 PM 1 comment: Links to this post

I Get to Push the Pram A Lot card 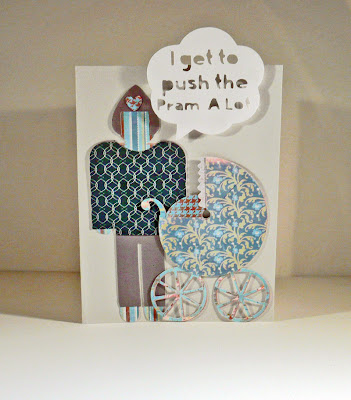 I finally made something for the Bitten By the Bug 2. The challenge was to use the pram on the Cricut New Arrival cartridge and the Camelot sketch from Monty Python sprang to mind. I think it would be a wonderful Father's Day Card for a dad who loves Monty Python, or a Just Because card for a Monty Python fan.

This was made using the Imagine and the Cricut Craft Room with the following cartridges: New Arrival, Going Places and Cricut Craft Room Basics (can only be used on CCR) for shapes. By using the Imagine and CCR I only had to use one sheet of plain white paper because I could flood each image with a different color or pattern from Lori's Garden and Mystical Garden. I had to make one file for each original cartridge because they are linked to my Gypsy and can not be linked to CCR at this time. There was no "Save As" feature, so I exported the original file with both cartridge cuts on it, and imported it with another name, deleted the cartridge cuts from Going Places without moving the images. That way I could use the same mat and paper for both files.

The knight is made with Going Places and then I used the shadow cut  twice with two different fills and hand cut the clothes for him. The helmet is made with an upside down heart with an unwelded square. He is glued directly on the cardstock. 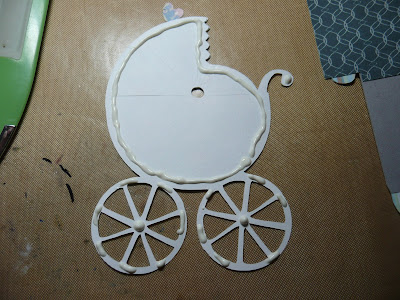 The pram has a little dimension. One of my favorite ways to get some dimension on thin cuts is to use Tombow Multi Use Glue and let it dry (still sticky though). I added a few more dots in the middle of the pram.

The sentiment is attached with relatively thick foam squares, the shape and lettering come from Cricut Craft Room Basics.
Posted by Ohhh Snap at 9:43 AM 9 comments: Links to this post