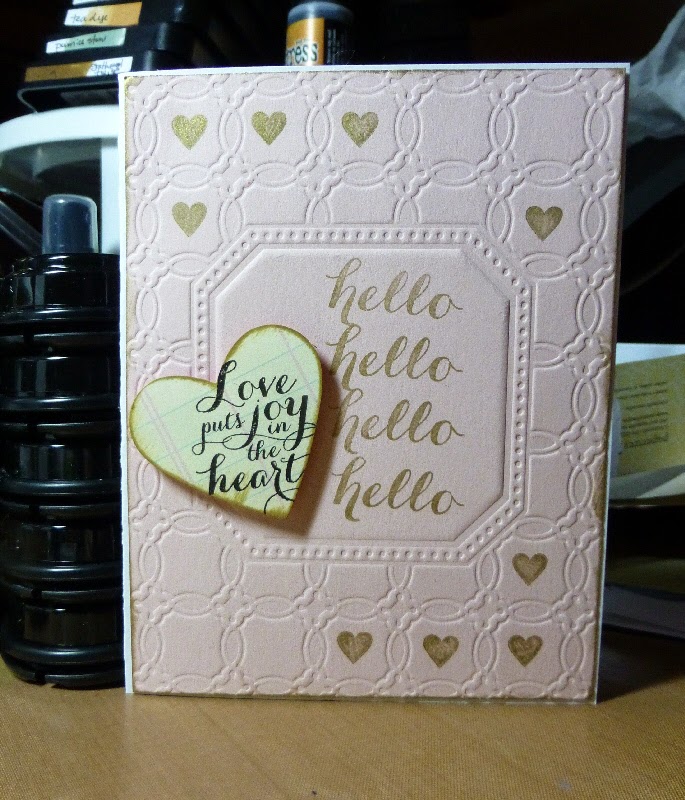 This month's Papertrey Ink Blog Hop challenge is to use hearts. It's been a few months since I had a chance to really play with paper. I've especially been wanting to use my Make It Market kits.

I don't have a lot of heart stamps, but I found one in the Make It Market kit: Country Fair. The front is embossed with the impression plate and the gold ink are from Make It Market kit: Luxe Letterpress and the sentiments are from MIMk: Beautiful Brushstrokes. The only things that aren't from a MIMkit are the heart punch and the Stamper's Select cardstock for the cardbase and the PTI chai inkpad used to ink the edge of the heart. I signed up to take Cards with Dimension: Lovely Layers, Textures & Embellishments by Danielle Flanders over at Craftsy.com. It is giving me a greater awareness of it all.

And because Simon Says Have a Heart for it's Wednesday Challenge, I'm entering it there as well.
Posted by Ohhh Snap at 6:46 PM 3 comments: Links to this post 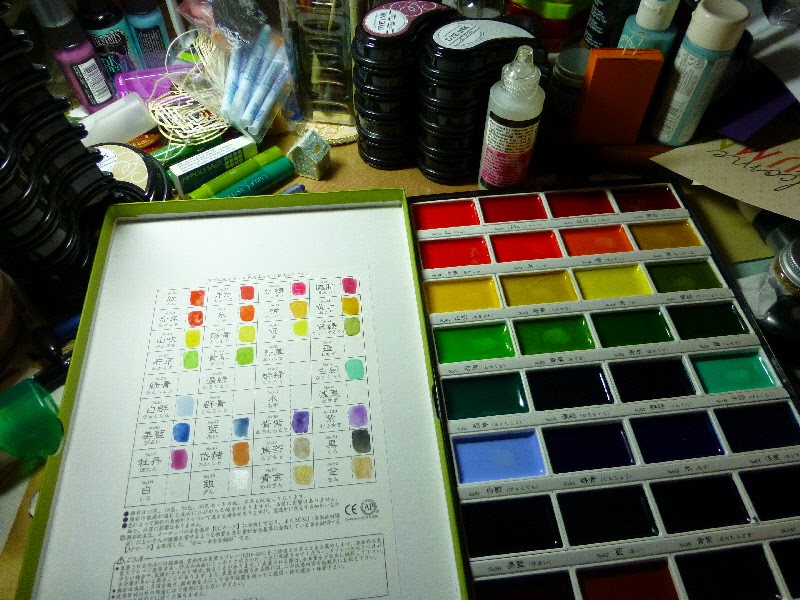 One of my Christmas gifts, Kuretake Gansai Tambi 36 Color Set Japanese Traditional Solid Water Colours The lid has a place to color in each paint including white, pearl and two golds. All I can say is oooooooooooooo : D.  I'm getting ready to color the card to go with the Christmas hat using the gnome stamp set I was gluing last week. 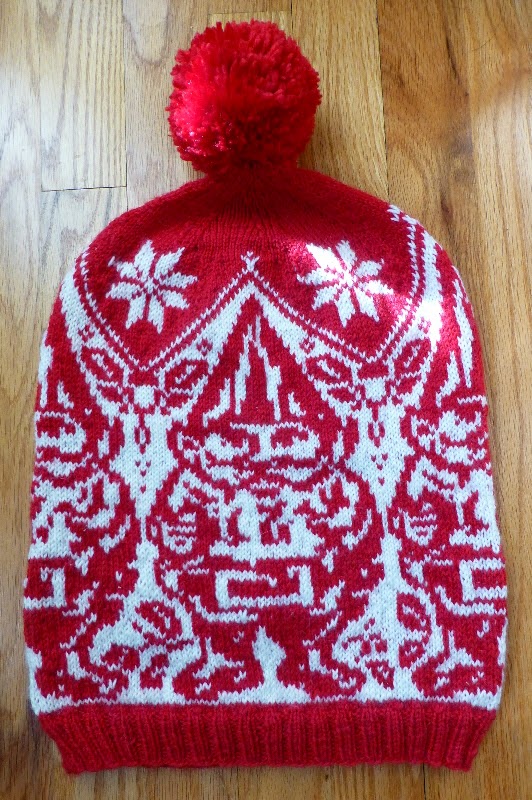 The Christmas hat is finally completed (blocking, big ass pompom, ends woven in and all).
Garden Gnome Hat pattern can be found on ravelry  here. It knits big. I used 2.50 mm needles
instead of 2.25 because my friend said she has a big head, from what I read in the pattern comments on the ravelry page, I could have done without the  increase lol. Note to self, read all the comments on ravelry (I found it on Etsy first I think). Without the pompom it measures 14 inches in length, if I had knit per the gauge it should be  11". But it fits in a slouchy way that is warm and comfortable, I'm hoping it suits the taste of the recipient lol. 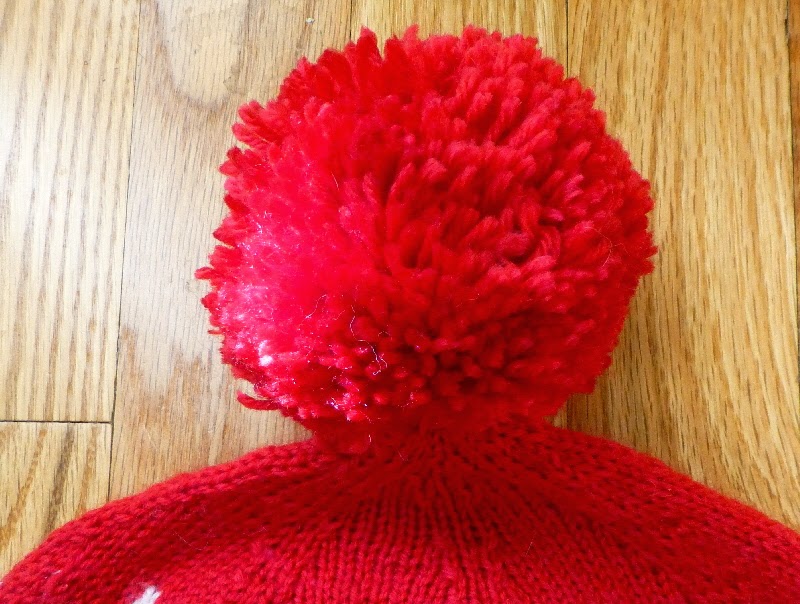 The  pom pom tutorial is one I found on Pinterest, it's in Japanese(?), but the pictures tell the story, at least enough to get the job done. I trimmed off a lot and it's still 3.5" across. Just another reason I'd hate to see toilet paper rolls disappear, but they seem to be much more flimsy then in the past.

To see more crafty spaces head over to Julia's Stamping Ground and have a gander : ).
Posted by Ohhh Snap at 9:53 PM 17 comments: Links to this post 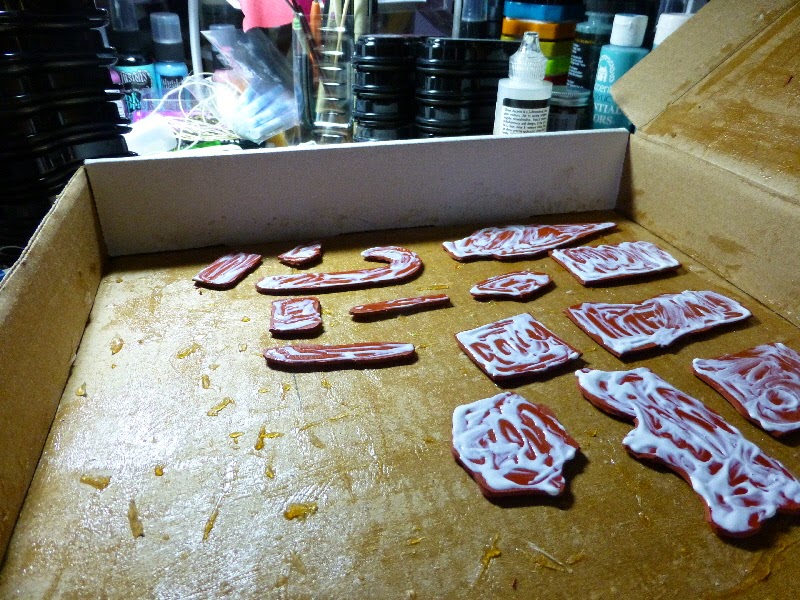 I'm still knitting the Christmas hat, but I've started on the decreases which is good but it's my first time doing a decrease with a fair isle pattern so it's lots and lots of double checking so it's like the closer I get to the end, the longer it takes to get there lol.

Today I decided to get the gnome stamp set from Club Scrap ready to use. So I use a glue that stays tacky (after it dries) on the back. I use a pizza box that has been covered in the glue. I can shut the lid and do other things if I'm so inclined.

To see more crafty spaces around the world head over to Julia's Stamping Ground.

Posted by Ohhh Snap at 3:13 PM 8 comments: Links to this post