A Card for Fall and a Thank You card 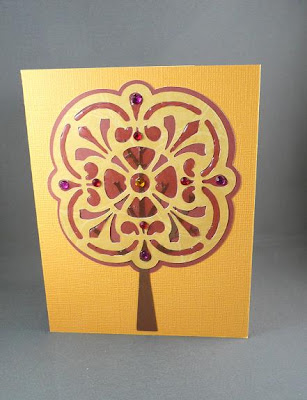 I made this card for a contest, which was timely as I had been wanting to try this all summer lol.  The treetop is made from a fancy cut on Straight from the Nest and it's shadow. The paper is Creative Memories, but I don't remember which set.  The card base is made with Core'dinations cut 5.5" x 8.5"  and folded in half. The tree trunk is from Serenade. and it is sandwiched between the fancy cut and it's shadow.  Please note rhinestones do not expire. I bought these from a now defunct store called Franks back in 1989. I filled all the cuts that have rhinestones in them with glossy accents. I also filled in some of the cuts without rhinestones.

Then I put the finishing touches on a Thank You card I've been working on all week. One of those get an element think about it, let it lie on the card for a while, move it lol. 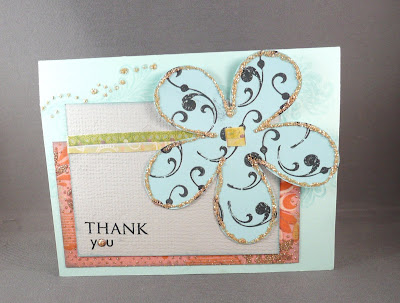 It started with the flower embellishment which I cut almost 2 years ago when I was just starting out with the  Cricut. I have NO idea which cart it came from or anything.  Then I went to my scrap box and pulled out a thin strip of shiny K&Co paper and my favorite pink, preglittered paper, and a piece of cardstock from Club Scrap's Framed  kit (this is the plain side).  I cut the shiny paper strip in two and used both sides, and strung it through the flower.

The flower looked too plain, so I stamped it with a Papertrey Ink stamp from the Embellishments stamp set, and then covered the ink using a clear glittered copic marker (also purchased from Papertrey Ink). I used my Splash BazzInk cube to tie elements together by inking the edges of the grey mat and to stamp flourishes on the card base. 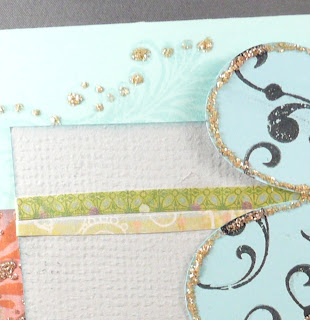 You can just see the background stamping there. Then I made liberal use of my Antique Linen Distress Stickles and a sentiment made from the Paper Tray Ink stamp set from Papertrey Ink.

Thanks for looking :D

Added: The flower is from George and Basic Shapes, in the slotted feature :D
Posted by Ohhh Snap at 8:44 PM 4 comments: