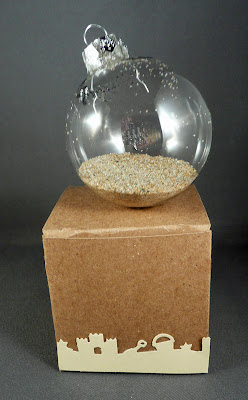 I made a second set from a different trip. It needed a different box so I could easily sort out which souvenir was which because not everyone went on both trips.

I can't stress how much I love Inkessentials Glossy Accents for sealing the little holes in the ornament topper. Trust me, you need to seal them or you'll be saying as I did, why is there sand all over the table? I just put a little over each hole and you really have to know it is there to see it. Sand weighs a lot, so a little bit of sand in each ornament is all you need. Plus this way you can sort of shake it like a snow globe (again important to seal up the top). The sand also makes it not a typical Christmas Ball in that you can set it down and it doesn't roll. It could of course be batted about by cats if they gave it a go.

It's lovely to see how different sands look up close. Oh to have some of the lovely black sand from Ms. Dunnit's recent vacation lol.

Learning my lesson from the first set of boxes, I scoured the local Hobby Lobby for six identical sheets of sturdier cardstock. I found the kraft cardstock was my best bet, and decided to just punch a little border with this EK Success beach punch. Wonderful except there was a little glitch in it that prevented the paper from cutting clean away so it had to be wrestled after each cut. At the end of the second strip I realized I had a Martha Stewart beach edge punch that might have been a little easier to use. See what happens when you put things away? I abandoned the idea of using a different ornament so I could use the same Gypsy file for the box (one of the boxes from the Cricut Wrap It Up cartridge).
Posted by Ohhh Snap at 11:07 PM 5 comments: