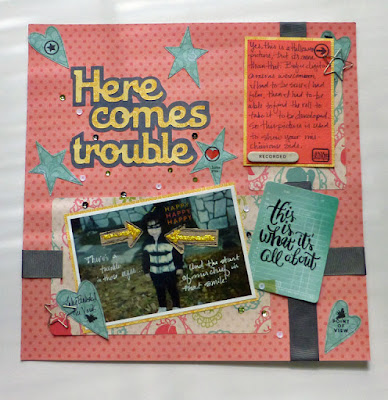 I believe this layout is finally done (really this time). The first time I thought it was done was back in 2011. But as I looked at it more and more, I pulled it out of the "finished" album and back in the "needs more work" box. It is not the best photograph. It was taken back in 1997 before I'd even heard of digital cameras. It was also pretty stark aside from the blue hearts and stars embellished with a pigma micron pen and the grey grosgrain ribbons. First I added some stamping with Papertrey Ink's Clip Tips stamp set and Honey Bees stamp set.  Some Maggie Holmes Ephemera, rub-ons and a cardstock sticker and some sequins are the finishing touches. 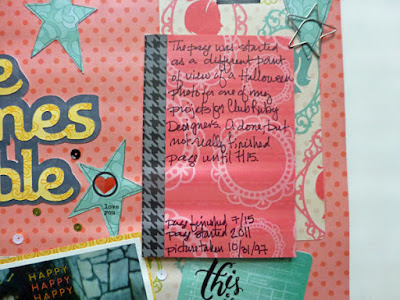 I read a post over at the Paperclipping Forum about writing dates on a layout, especially when there is a long time lag, so I put that information on the back of my journal card. 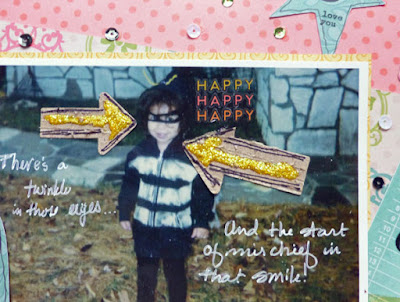 The photograph is pretty bad, but I love elements about it, and I don't have a lot of photographs taken at our home from this time period. I wrote on the Journal card about how I had to buy film (and make sure it wasn't expired when I loaded it into the camera), then take the pictures, safely unload the film and keep track of it until I could get it developed. So I added the Happy rub-on to emphasis there is a happy child there (at the age of three Halloween is all sorted out).  It's not a Halloween layout, it's an up to a bit of mischief layout using a Halloween photograph because, so I wrote the aspects I wanted to highlight in the layout directly on the photograph.

So it's not the most artistic layout I've ever done, but I have to say it is one of my favorites for all the reasons mentioned above.
Posted by Ohhh Snap at 9:14 PM 1 comment: