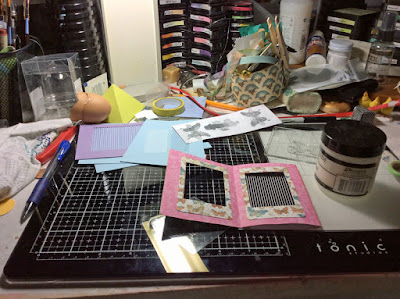 I actually took this picture last week, but lost the day. The week has been pretty slow in the crafting lane, so it still looks exactly like this. Hoping the video works, as it took me the better part of the day to figure out how to get it to my computer : D. I have resumed knitting my Starflake Shawl Mystery Knitalong (that is not a mystery anymore, I believe I am bringing up the rear). There is brioche, and today I managed to drop a stitch, so it's a deep dive into YouTube's how to fix brioche mistakes with lots of breaks for quelling the panic.


For more crafty peeks head over to Julia's Stamping Ground.
Posted by Ohhh Snap at 7:29 PM No comments: 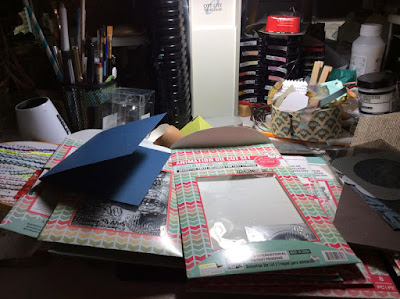 Errr mer gerd there are signs of imminent paper crafting. First time in ages I have the urge to make a card. But not just any card. A motion stamp card. And perhaps other sorts of interactivity. I am trying to convert the Reading Rainbow song into a card. So that escalated quickly.

2020 the year that made Levar Burton cuss on Twitter (justifiably so in my opinion). I am still social distancing, but participating in Black Live Matter issues through the interwebs. If you want to unpack your unconscious bias, I suggest reading Me and White Supremacy by Layla Saad. 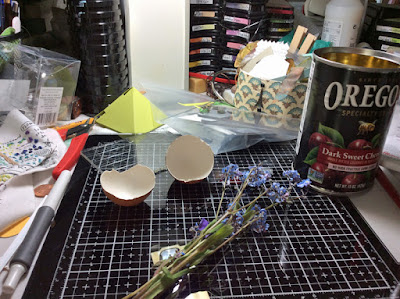 Happy 11th Deskers! It's been a day. I meant to get here earlier, but it's been a day. First there was a fire at the end of the block. Then our water turned brown, and then we had none because apparently down the street from the fire there was a water main break.

I baked a cherry pie (canned aka tinned fruit) and loved the cans so much I planned on coating them with Ranger's Mixed Medium (accomplished) and then using them as vases for the forget-me-knots only we have no water .... so maybe I'll press the flowers instead. 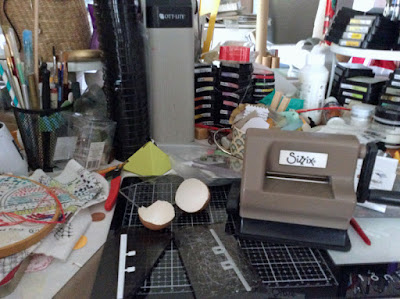 I am unbelievably joyful that the sun is shining today even if I don't step foot outside : D. I picked up the Tim Holtz mini work surface a while ago and the best thing is that it hold the mini die cutter securely making it so much easier to use it. Working on a few little things here and there, and sorting through some piles that have carbon dating lol. It's a step at a time with lots of breaks for Korean dramas and Animal Crossing when it all gets a bit overwhelming.

I actually planned to post last week but didn't realize the day until it was Friday. ... All my regular weekly pin points are put aside. It is ironic that if this had happened a year ago, it would not have made a big change in my life.

Apparently we have at least two people who tested positive for Corona in our little town, so whenever possible I have my prescriptions delivered and wipe everything down. I switched to a meal prep delivery system for a few weeks to see if that works. They deliver the sorted by meal ingredients and I do all the cooking. Seemed the safest with all the allergies I have. Hope everyone is doing well. All the deep cleaning is triggering my dust allergies so I keep reminding myself it's dust and allergies : D. 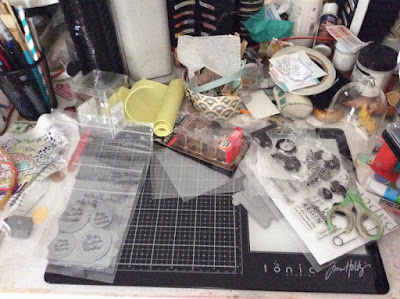 The current state of the workdesk, preparing a baby shower gift. Also preparing a new Dungeons and Dragons character : D in between a couple of cloches as one does. 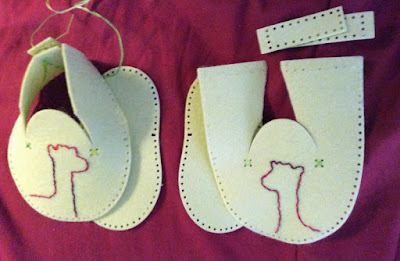 A pair of lime green baby booties with the outlines of a giraffe stitched on each one awaiting final assembly.

Head over to Julia's Stamping Ground for more crafty goings on.
Posted by Ohhh Snap at 8:30 PM 7 comments: 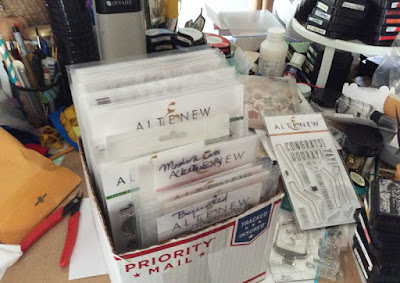 The current state of my workdesk : D. I spent days looking for this box of Altenew stamps... days. 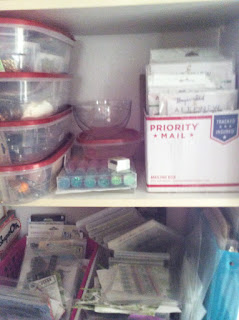 It was sitting nicely exactly where I had left it, hidden in plain sight.This is why I have multiple projects lol. 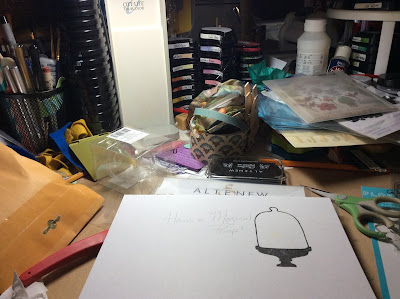 It's been a minute : D. But my desk is still the same-ish. Different project, but some of the same bits and bobs. This is a put aside from my Happy/Magical Poop series. In the end I wound up stitching "Happy Pooping" on perforated paper in a glass enclosed frame, because bathrooms. It was for my friend's son who loves toilet humor. But really, a good poop is such an under-rated good thing. I've also been doing quite a lot of knitting. 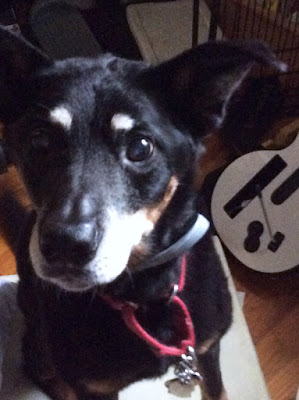 I am still quite devastated by the passing of Gertrude, my companion for 11 of her 15-ish years back in August.

I have been shifting from Mother to Crone and it's been a bit awesome overall. Sorting through pretty much everything, but not on the same day, because that is the way of madness lol.

I had a mini-stroke back in November, but had very very very minimal damage. I'm still a big fan of Grumpy, but now with an overwhelming dose of cheerful on top of it. Also a heaping side of "If not now, when."

So head over to Julia's Stamping-Ground for more crafty goings on. : D