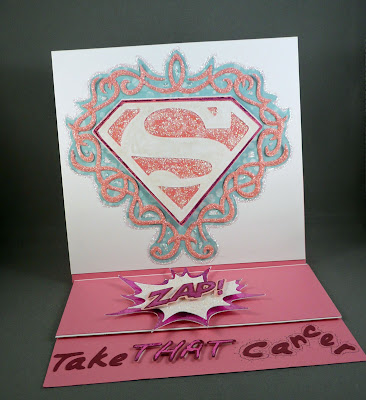 I made this card for Monique Griffith who just finished her chemo. It was one of those things I could see clearly what I wanted it to be, but it took me a while to get all the details down pat. It's a pedestal/easel/stand-up card that really stands up because I pushed the brace part back a bit. I didn't want the super emblem to be slacking. I learned how to make these cards last year at Everyday Cricut, before that I just over thought the whole process.

Paper: Stamper's Select White (card face most of the "S", one layer of the brace and both layers of the zap base) and Hibiscus Burst (card base one layer of the "S") and from Papertrey Ink, and some light pink, maroon and blue scraps from my scrapbox.
Cricut cartridge: Superman (including the font).
Foil: Martha Stewart from the foil kit.
Embellishments: Crystal and Cotton Candy Stickles, Pearl Ex Powder. 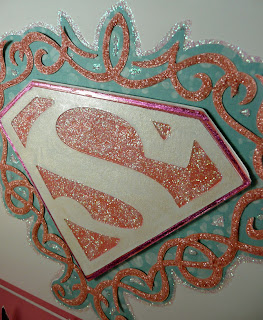 Starting with the Icon, I cut the shadow out of some blue scrap and glued embellishment layer (cut out of some pink scrap cardstock paper) to the shadow but not glued everywhere. I wanted the stickles to lift it up a bit where it wasn't glued down. I used two heavy layers of Cotton Candy Stickles for this.

After I was sure that was what I wanted I glued the blue shadow to the white cardstock and outlined it and all the openings in it with Crystal Stickles.The white part of the icon is covered with white Pearl Ex powder. The Hibiscus Burst background is coated with Crystal Stickles and edged with Martha Stewart Foil. I made two more icon bases to make sure it wouldn't warp. Then the whole icon was covered with Triple Thick Gloss Glaze by DecoArt and attached with foam tape. 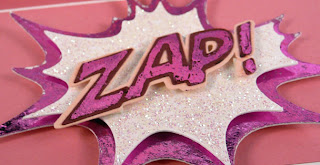 The shadow layer of the mat is cut from Stamper's Select White cardstock by PTI covered with Martha Stewart foil. The smaller layer is the same cardstock covered with Crystal Stickles. The shadow of the Zap! is cut from the same pink as the Icon embellishment. The word is cut from maroon. I used a Sakura Quickie Glue pen to draw a Zap inside the cut and covered it with the Martha Stewart foil. I used a lot of foam tape to put everything together.
Posted by Ohhh Snap at 8:41 PM 3 comments: