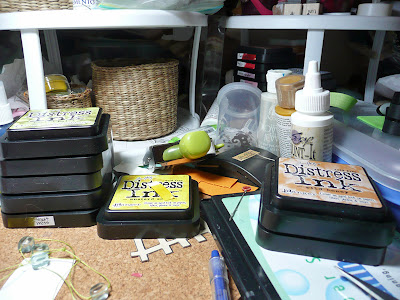 I'm in the middle of labeling all my distress inks. I saw some on desks done in a similar manner. Very handy and saves a lot of going through stacks one at a time lol. The green string and beads is a little necklace I made a while ago, that wandered back to the desk lol. 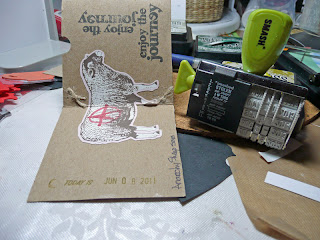 There's a lot of talk about Smash books by K&Co., which I don't have, but I did find this lovely stamp. I've yet to master the art of stamping it without getting the left edge of it stamping as well, but it's fun and anarchy sheep doesn't mind :D.

I think I made 5 things before I decided which would be my PiF (pay it forward) for the 104th WOYWW, including one that demanded to be sent to Julia Dunnit lol (which I'll post after I've had word it's been received). I was tickled pink that I got to send my PiF to Elizabeth and Bleubeard, and especially pleased she really liked it :D. (I have something to make for Bleubeard, but it might take me a little while). 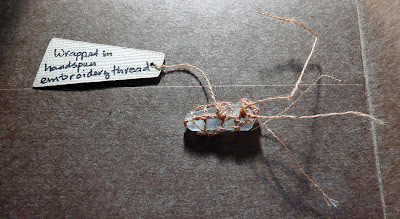 Finally I decided this little piece of sea glass (collected in Rockport, Mass) and wrapped in handspun wool embroidery thread (wrapping was a bit more difficult than I thought it would be) would do the trick :D. I love how the thread is visible on the other side (in real life, harder to show in a photograph). I took the photograph on a kraft glassine envelope. Truly a wonder this stuff :D. I confess I'm also partial to regular glassine and wax paper lol. 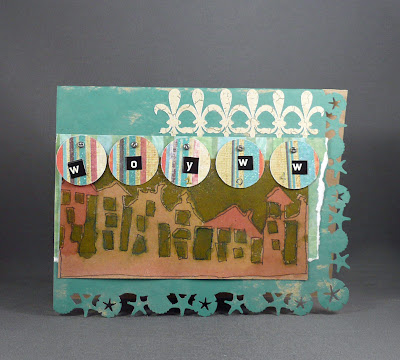 I thought it appropriate to send a card along with my PiF. Actually the entire card was made with things that had been on my desk (some longer then others, some actually made their way into storage tins lol), and as it was a WOYWW event card, that seemed the height of appropriateness to me :D. And also because it was a WOYWW card, I wrote a long list about what everything was from on the back lol.

With the beachy feeling of sea glass, I turned my Tim Holtz townscape shared in an earlier WOYWW into a beach town. Papertrey Ink kraft cardstock makes the edge stand up even after being sea punched (Martha Stewart). The fleur de lis border is from Octoberish 2009 when I got my Gypsy at the launch and I was madly testing the two cartridges that came pre-loaded on it and couldn't bear to toss perfectly good embellishments just because I didn't know what to do with them lol. I also bundled up a few things that had been on my desk as goodies, Papertrey Ink buttons, a bit of film strip (also by Tim Holtz), a sheep I stamped and cut out, sheep from my Imagine, etc.

It also gave me a chance to use my tiny tiny Tim Holtz brads which I didn't realize, until I used them, had screw heads punched in the top (philipsheads and slots!). So crafty, that Mr. Holtz lol.
If you are wondering what's all this WOYWW, or if you are just curious to see what other crafty folks have on their desks, head over to the Stamping Ground and have a gander. Better yet, join in :D.
Posted by Ohhh Snap at 12:44 AM

Oh, lovely PiF - and you're even thinking of sending something for Bleubeard. You are so sweet! Love the PiF, such a beautiful idea with the sea glass, and the card is gorgeous.

I'm THRILLED that I am the lucky recipient of your gifts. Because your camera is SO much better than mine and I can't take close up photos with this old camera, may I please use the photo of the sea glass for my blog? I can't get anything to work.

I'm a sucker for recycled and using things that were lying on your desk. Each of these goodies is extra special and I feel these goodies were put together just for me. Thank you again, dear S. I really, really appreciate all your kindness.

Elizabeth of course you can :D

Wow what a fab idea love the sea glass and im sure Bluebird will treasure it!Im another one for recycling too.
Have happy creative wednesday
hugs judex2

Love the gifts - love your card too I didnt realise that was the Tim houses until I did a double take - how fabulous is that technique! will have to give it a go. I label all my distress inks (and blending foams!) too - saves so much time. Thanks for sharing - Sunshine Girl (no. 31)

Love your sea glass piece and I know Elizabeth will adore it, along with the card which is lovely too!

Great gift and I love the card. Hope your PIF arrives soon!!

ooh sea glass how cool the card is super duper I must say ;0) Dxx

Fabulous post, I love reading it, can't wait to see what Bleubeard gets! Love your card, I made one....but forgot to put it in my package. Have a great woyww
(Lyn)

Lovely PIF. I'm sure that stamp has been re-purposed from a previous product! I saw that at a CHA at least 5 or 6 years ago. Still cool. You need a Post-it Note mask :) (to stamp 1/2 only)

love the sea glass. I am impressed with the weaving/wrapping. Very nice! Nice card too. Thanks for sharing. Vickie #50

Hullo there Snap thought that would come a little earlier to your desk this week and beat you to it!! Gorgeous card and sea glass wrapped. I love them both; thanks for sharing and happy WOYWW! Shaz in Oz.x

fabulous and original gifts... and a great card too. I have the same problem with a date stamp - try adding bit of masking tape before inking up.
Have a good WOYWW,
Sarah at 7

Hugs, Sandra Take a peek at MY PIF here

What a wonderful necklace and a beatiful piece of glass. We were at the coast the other week beach combing and was so disappointed that we did'nt find any glass.
Kathleen x

What an interesting pif ...it will make a brilliant keepsake ...love the card too

It's not often you see sheep on cards...nice to be different. The sea glass necklaces are beautiful. I think you showed some a while ago...lovely and a very nice way to present them.
Sue xx

lovely PIF and card...very organised with your inks.
happy WOYWW

Thanks for letting me know your PIF arrived - and glad you seem to like it, lol!

I really love sea glass. A friend has a lovely collection. Even though I live by the Gulf, it is not a sea glass garden. #100

I'm amazed at how different everyones gifts are, yours is so sweet and I love the card. Teresa x

WOYWW now makes sense! hahaha I had to come to the blog to figure it out.

Love your colors and the distressed look!

Beautiful pif gifts and I LOVE your anarchist sheep!!

I love your card, it is screaming summer to me and I am so ready for summer. :)

Looks like I'm the only one who doesnt know what sea glass is then! I had to do a double take to realise it was a townscape too!

Love that sea glass, it is so pretty, and what a good way to use it.

Such a thoughtful and beautiful PiF gift...It has been so lovely seeing what everyone created for this wave of friendship round the world.
JoZarty x