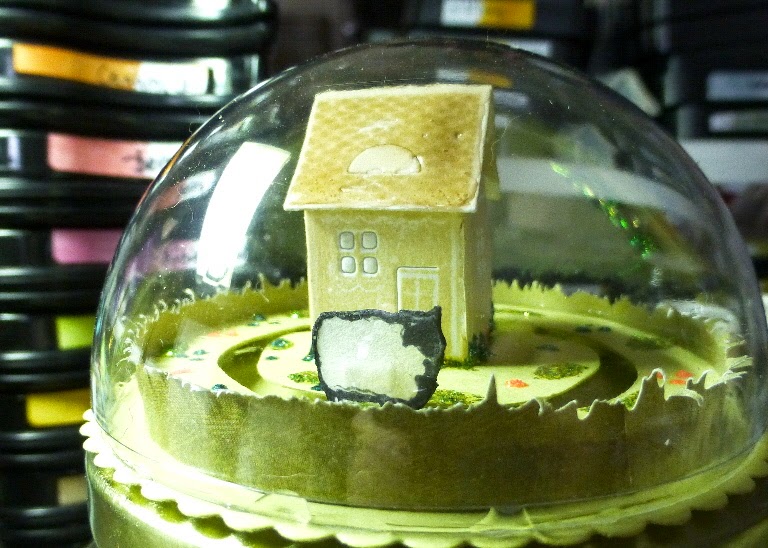 It's a sheep spinner dome.I had a vision of putting little sheep in a dome with Papertrey Ink's Make It Market kit: Tinsel & Tags Trimmings house. And originally they were going to be fixed in place, but I wanted it to move.

I briefly considered making it moved by magnet, but since it'll be auctioned off I decided to make it a spinner. (Magnets can be very dangerous for small children and can be lost which would make it a fumbling sheep). You can see another Dome Scene with moveable deer (with a magnet) here, there's even a little video of it in action.

The house is cut from Vintage Cream. The house is stamped with Fine Linen, and painted with Fine Linen smooshed on the craft mat and spritzed with water. The same is done for the roof except with Classic Kraft ink. After it was assembled I put Glossy Accents on the roof. 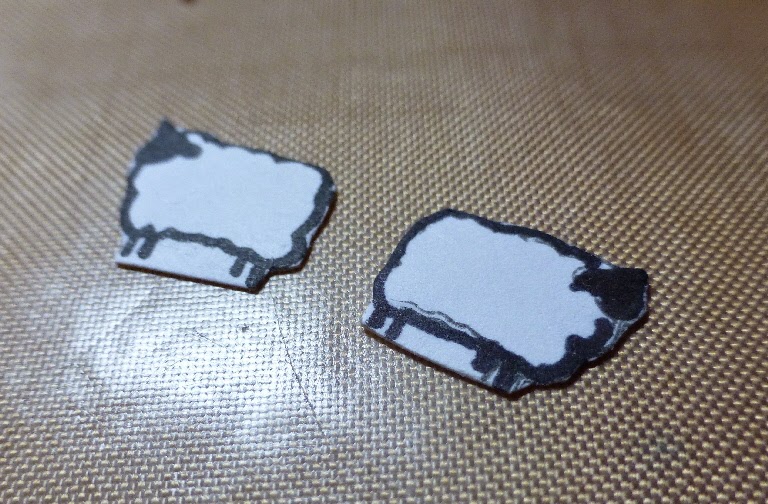 After getting some great advice from the PTI forum about stamping backwards, I was able to stamp a sheep in each direction. I used Versafine ink, stamped the image on a solid stamp and then stamped that onto cardstock. (the reverse stamp is the one on the right). I went over it with an ultra fine line Sharpie. 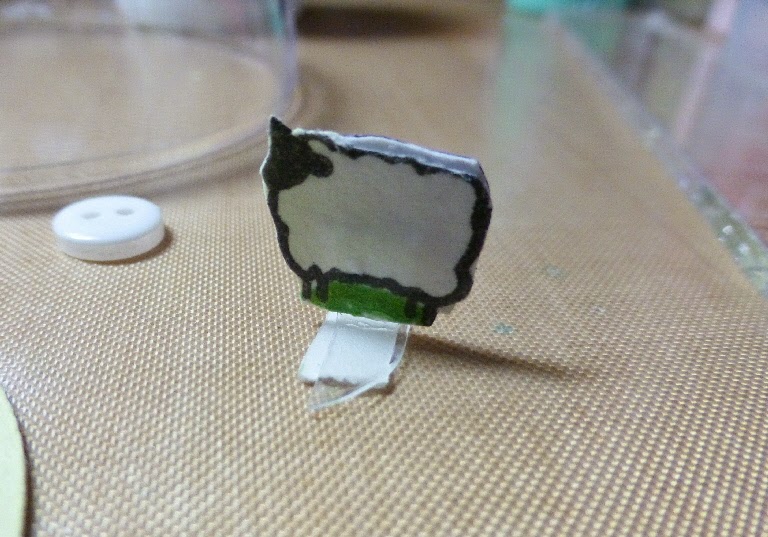 I folded a small strip of plastic packaging (cut from the bit that folds in in a Papertrey Ink box) and glued a sheep on each side. Then I bent open the two ends like a brad. The space under the sheep was colored with a green marker. After this picture was taken I colored in all the white edges with a Black Soot Distress Marker. 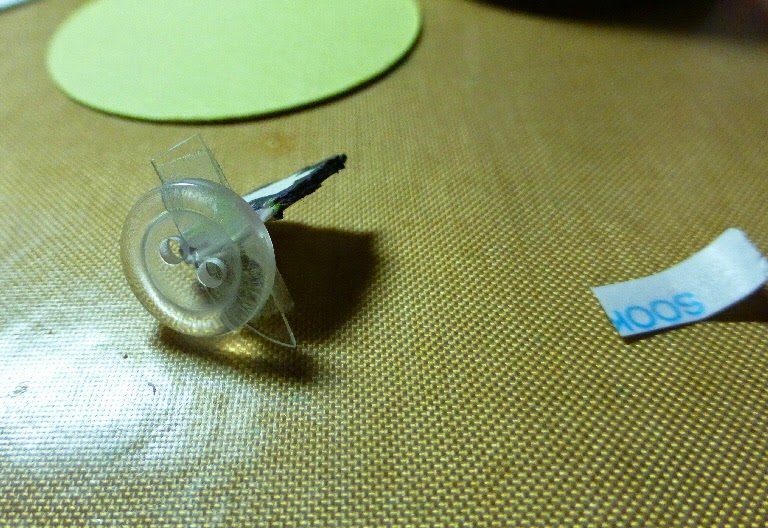 Here it is attached to the button with score tape. The plastic was trimmed along the edges of the button.  Because of the width of the plastic I used, the sheep travels in a straight line. 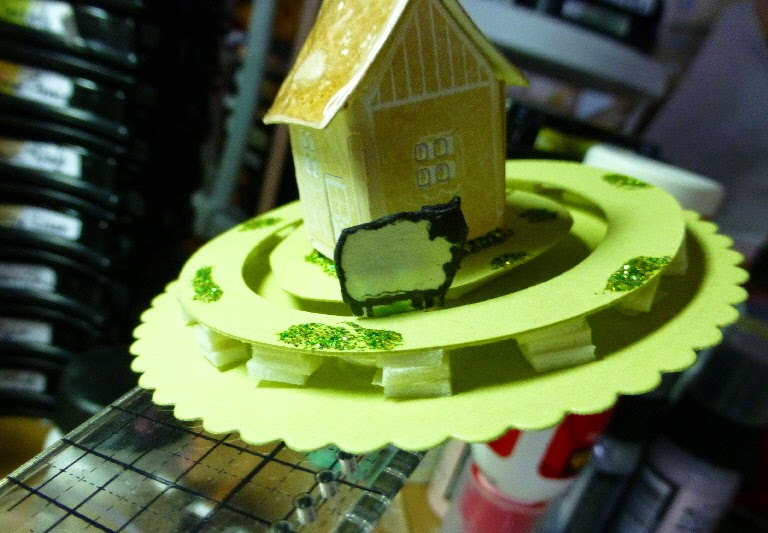 Originally I used 2 layers of foam tape, however the plastic stand for the sheep added more height than I anticipated, so a third layer had to be added. Note to self: test height after the sheep is attached. 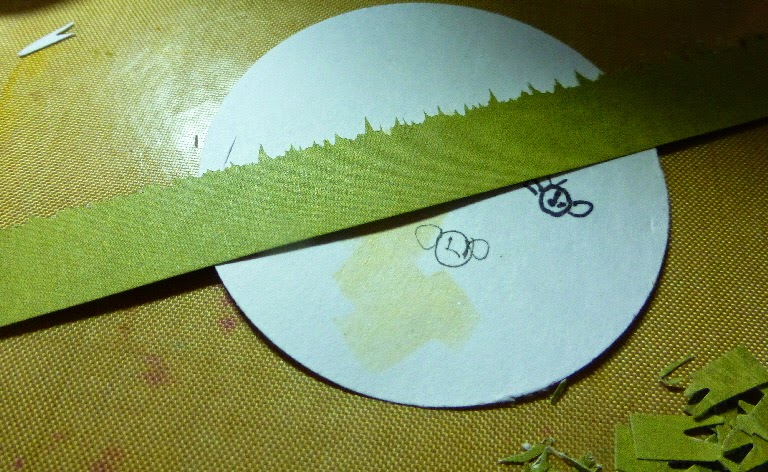 The foam tape needed to be covered. The Martha Stewart Icicle Punch can make great grass by moving it every 1/4" - 1/3" instead of following the repeat pattern marks.  I put a 1/4 length of score tape right under the grass and then cut off any paper under that, peeled off the tape backing and wrapped it around the outer circle. (The doodles are "Time Flies" from a previous project). 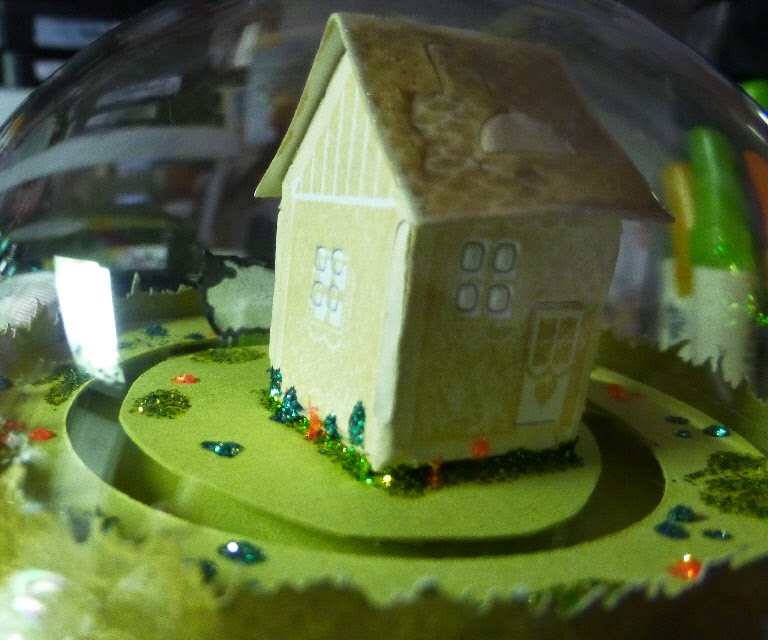 Here's the other side of the sheep and all the Stickles flowers.

I have never seen such a unique piece! The design is incredible. Love this! Thank you for sharing your work with us this week for the Simon Says Stamp Monday Challenge.It was so fun finding this delightful piece on your blog. Thanks again!
~Michelle

I agree that this design is VERY ingenious. You really ARE a builder. I was super, super impressed with the sheep, the movement, and the way you got it all under a dome. You really built not just a building, but a beautiful scene to go with it.

Your comment about the ceramic tea bag holder floored me. I got it from my friend Annette (Voodoo Vixen). The tea and card holder came from Julia. Sorry if I misled you.

This is so sweet! And it is a button!? I didn't know how that was done. I love how your mind work, especially with things like using the icicle punch! The whole thing is ingenious!