Under the Sparkling Sea 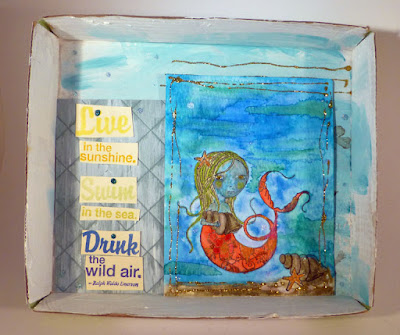 Today did not go as I had planned lol. I was sorting through stamps last night and became obsessed with the idea of using the Mergirl set by Santoro London so I went with the mojo and did a little mixed media piece. The challenge Work It Wednesday on the Simon Says Blog is Refreshment, and I thought how refreshing it would be to be a merperson under the sea. Used a LOT of Distress Markers and Twinkling H2Os and restrained myself with the use of Stickles. The frame is the base for a Christmas Ball set, painted white with drops of blue (and a big brush) and applied a doily in the paint. I also stamped some sea weed, a mermaid from a different set and some puffer fish but most of them were covered up. The base for the sentiment is Ocean Tides embossed with one of the We R Memory Keepers Geometric embossing folders and dry brushed with white paint. The sentiment is from Club Scrap's National Parks kit, stamped in a slew of inks. 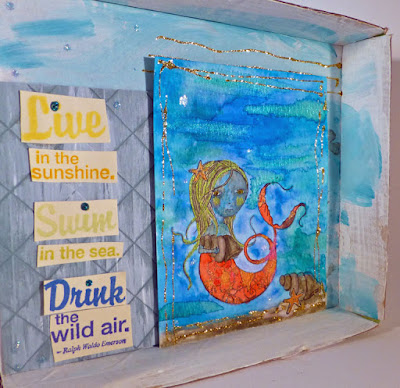 There is a lot of sparkle between the Twinkling H2O paints and the Stickles.

Lots of fun sparkle on this project! Love your underwater scene and great quote too. Thank you so much for playing along with us over at the Simon Says Stamp Monday Challenge Blog this week :)